Marketing the Mayweather Vs McGregor mega-fight 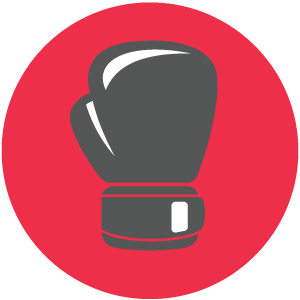 It was a match between one of the greatest boxers in history and the biggest name in the UFC, but the real winner was business. It provided some businesses with a huge platform to market their product and services, with some taking full advantage of the Mayweather McGregor train.

Thanks to this monumental sporting event, we’ve had the chance to see some big wins for various aspects of digital marketing.

Some companies were prepared to pay the price for digital marketing opportunities and bought ad space on Google for what must have been some hugely competitive keywords. Among these was Betfair, but with UK betting companies pocketing a knock-out £250 million from punters, we’re not sure they cared about the cost.

The gloves were off on the sponsorship front, with sponsors seeing their social feeds boosted massively by the fighters: Swiss luxury watchmakers Hublot had their name branded across Mayweather’s shorts and, between 27 July and 27 August, 30% of all Hublot’s engagement on digital content was related to Mayweather. When it came to crunch time, there was 184% more digital content engagement around Hublot across the three days around the mega-fight compared with the three days immediately beforehand. 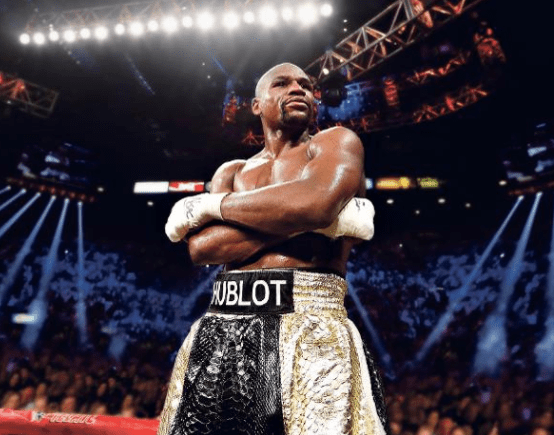 Even though the fight happened outside the UFC’s cage, it actually raised the profile of the Ultimate Fighting Championship® (UFC) into many people’s lives. Between 23 July and 23 August, 41% of all UFC-related digital content engagement was Mayweather related, highting UFC to a whole new audience. Maybe this will lead to more sporting crossovers in the future: McGregor vs Phelps or McGregor vs Federer perhaps?

Don’t let them get you on the ropes

When it comes to offering a product or service to your customers, always make sure you can deliver, otherwise you end up having negative engagement and bad PR. This again was demonstrated during the Mayweather Vs McGregor bout. Because of the popularity of the event, many fans had problems logging in to its UFC Fight Pass because of overwhelming traffic, despite having paid for it. This led to 55% of the tweets mentioning @UFCFightPass being negative which is appalling PR. Always make sure you can deliver.

These marketing methods aside, we know how influential social media can be for creating business and this bout was no different. In fact, without it, the biggest fight in boxing history would never have happened. What started as a meme posted by Mayweather (see below) as a retort to McGregors call outs then turned into the largest sporting spectacle in history. 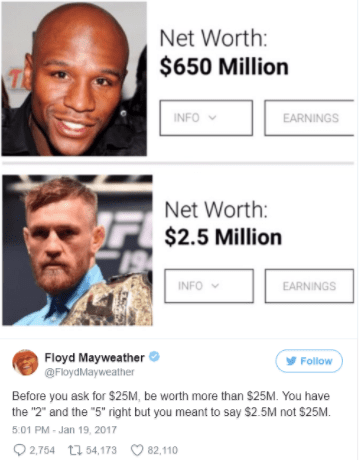 And the winner is…

Ultimately, both two fighters were undoubtedly winners. They have a collective follower base of just over 13 million on Twitter alone which helped bring about extra funds in the form of sponsorship and promotional deals. According to Casino.org, each of the fighters gained around 400,000 Instagram followers during the fight, averaging out for Mayweather of more than 4,000 followers for every punch taken!

In short, both fighters broke this wonderful virtual city that we call social media. Famous faces from across the globe got talking, the public got creative, and memes, videos and blogs shot across the internet, creating even greater scope for endorsement opportunities.

The potential that social media possesses has yet to climax, and now the bar has never been higher. What’s next?

If you would like to find out more about how digital marketing can help your business, get in touch!