New Reactions on Facebook – do you love them or hate them? 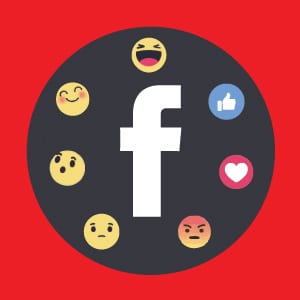 For those of you who haven’t noticed the new feature yet, Facebook has now added a range of 6 reactions to choose from when scrolling through your Facebook feed.

All you have to do is hover over the like button on desktop or hold down the like button on mobile and you will be presented with a range of new emoticons to express how you feel about the post you have seen. The top three reactions each post has received will then show up underneath – clicking on them will allow you to see the breakdown of the total of each reaction.

You can now choose between like, love, haha, wow, sad or angry.

No more trouble with liking a sad post from a friend and wondering if it would be taken the wrong way or writing another lol in the comments.

Why did they chose these reactions?

Global research and surveys have been carried out to determine what type of reactions people would like to see implemented most and which types of emoticons are already being used most frequently.

Are you happy with the ones that were decided on or would you have added something else instead?

What does this mean for my Facebook news feed?

Some Facebook users would have expected that expressing their dislike to a post using the angry or sad reactions would then lead to them being filtered out from their view more and that ‘loving’ or ‘hahaing’ a post would encourage them to be shown. This is not the case however.

Each different reaction is treated in the same way and still counts as an interaction with the post. This means if you say you are sad or angry about a post it will still count as an engagement which will then feed into Facebook’s algorithms and therefore be more likely to be shown to other Facebook users. The site has however confirmed that this is something that they will be looking into in the future.

Unfortunately for Marketers the reactions cannot be used to our advantage and help us to target people specifically – yet.

We are hoping for additional functionality to be added to allow us to target people who have reacted with a love reaction to a cupcake with adverts for a local baker, or users who have reacted with an angry reaction to a bad hair day post with an advert for a local Hairdressers. Although this isn’t available yet we at Cariad Marketing are hoping that Facebook adds this functionality in the near future.