The best SME business person in the UK! 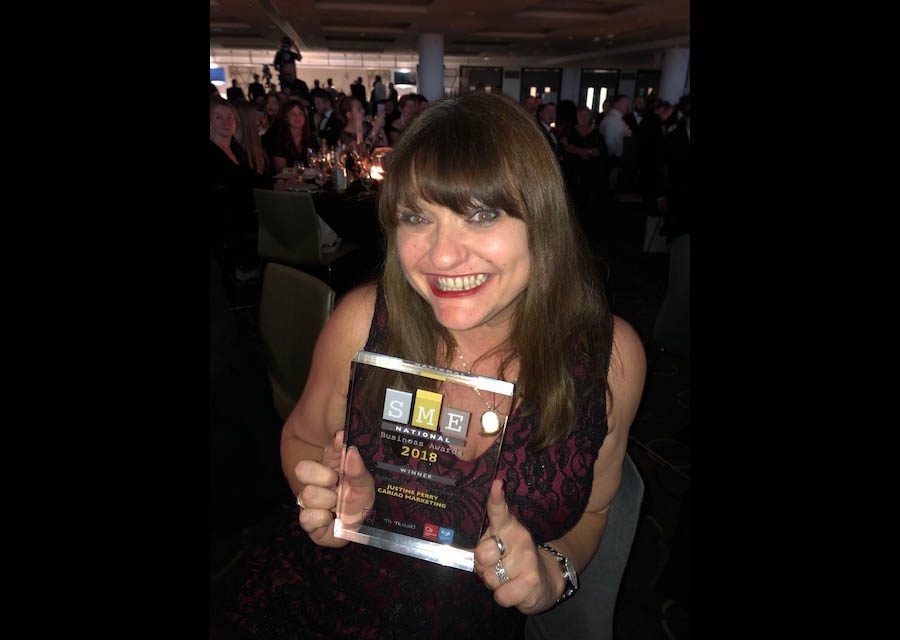 Wow! What a year 2018 was and December was the icing on the cake for me. After winning the SME Hertfordshire Business Award in the summer, I was automatically put through to the UK final. I was up against ten regional winners from all over the country so it never occurred to me that I was even in with a chance. It was a privilege to be honoured alongside so many outstanding business people from across the UK, and I just wanted to enjoy a glitzy night out with Team Cariad.

The SME Award judges were looking for what makes one person stick out in business, be it brilliant people skills, good financial wizardry, a good listener, there are many attributes that come together. So imagine my shock when my name was read out! It was such an enormous honour – not to mention a little overwhelming. One of the judge’s comments about what made me stand out was about “her drive and determination despite adversity”, which brought back a lot of memories of my late husband Steve.

Apprentice of the Year

Also with me representing Team Cariad was Rory Welch, SME Hertfordshire’s Apprentice of the Year, who was also up for an award. Sadly he didn’t win the national award, but just being a finalist makes him one of the UK’s top five apprentices, which is an incredible achievement worth celebrating.

When it came to awards, Cariad had an amazing year – The SME National Business Award was is the company’s fifth business award of 2018. And it wasn’t only a fantastic end to the year, it also marks a brilliant start Cariad’s second decade – we’ll be celebrating Cariad’s 10th anniversary in February. The Justine who set up her new business in 2009 would be amazed at the thought of what she is capable of, and probably wouldn’t believe she’d be the winner of such a prestigious award.

Congratulations to all the finalists

If small businesses have got a chance of succeeding then we all have to support each other. So I’d like to give a shout out to all the finalists in the Business Person of the Year category – to the runner up Roger Wertheim-Aymes of AYMES International, and the other finalists, Andrew Stanton of Stratton Food Hall, Ashley Cooper of Edward Cooper Young Chartered Surveyors, Craig Joseph of intY, Daniel Brooks of VHR, Melanie Goldsmith of Smith and Sinclair, Nick Bonner of The Tollemache Arms, Neil Keenan of Millstream Estate Services, Patrick Horan of Bombinate Web Design and Stacey Dennis of Love Layla Designs. Wishing them all a successful and prosperous 2019.